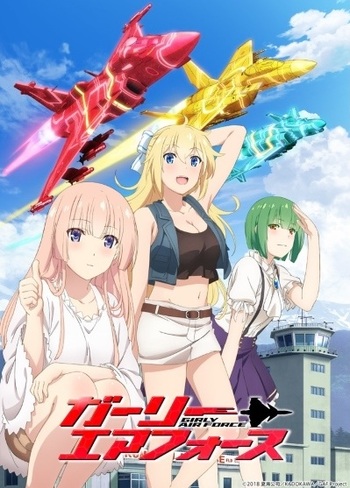 Kei Narutani's life is forever changed when a mysterious invading force called the Zai attacks Japan with technologically superior aircraft. Humanity has learned to fight back using their own advanced aircraft called "Daughters", piloted by "Anima", genetically-engineered special pilots that look and act like teenage girls. When trying to escape a Zai attack with his friend Minghua, Kei finds a Daughter who crashed into the sea. He rushes towards the Daughter and tries to save the pilot, who suddenly kisses him.
Advertisement:

Much later, Kei has decided to join the Japanese military to defeat the Zai, an attack that displeases Minghua greatly because she believes Kei will get killed. Kei attempts to infiltrate a military facility that houses the same Daughter that saved him from the Zai, and Minghua attempts to stop him but they are later captured by the facility's soldiers. They tell Kei that he was able to get the Daughter to fly properly and they offer him a chance to help them to fight the Zai. To that end, they introduce him to the pilot he tried to save, a girl called "Gripen."

Girly Air Force is a light novel series written by Kōji Natsumi and illustrated by Asagi Tōsaka. It has been published by ASCII Media Works under their Dengeki Bunko imprint since September 2014 and, as of 2018, it has spawned nine volumes. An Animated Adaptation by Satelight premiered on January 2019. Crunchyroll is streaming the anime, which can be viewed here