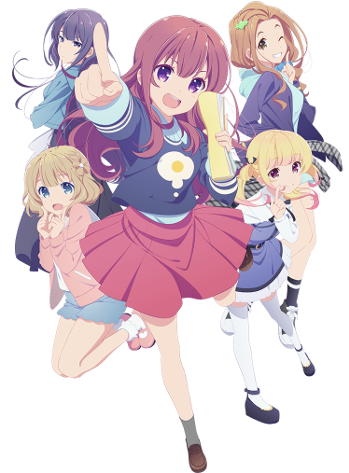 Front and center: Chitose. Behind her, clockwise from top left: Kazuha, Koto, Momoka, and Yae.
Advertisement:

Girlish Number is a multimedia project about the Japanese voice acting scene, written by Wataru Watari. It debuted as a light novel series in March 2016, which ended in July 2017 with three volumes. A manga series also ran from April 2016 to July 2017, and an anime premiered in fall 2016.

The story focuses on Chitose Karasuma, a fledgling voice actor who has been in the business for a year. In that period, she's only had bit roles, and that's left her feeling bitter—until her brother/manager lands her a leading role in an upcoming Light Novel adaptation. However, some behind-the-scenes troubles threaten the project. Can Chitose endure and get the big break she's looking for?