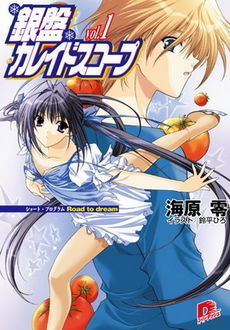 (Taken from The Other Wiki)

Ginban Kaleidoscope (銀盤カレイドスコープ, lit. Skating Rink Kaleidoscope) is a series of light novels written by Rei Kaibara and illustrated by Hiro Suzuhira. The manga adaptation is authored by Jun Hasegawa. There was an anime adaptation of the first arc of the novels, aired weekly on TV Tokyo from October 8, 2005 to December 24, 2005.

The story revolves around Tazusa Sakurano, a Japanese Olympic figure skating candidate, and Pete Pumps, a Canadian stunt pilot. During a qualifying round in Montreal, Canada, Tazusa falls in the middle of a Triple Lutz and loses consciousness. At the same time, Pete dies mid-performance when his stunt plane crashes due to mechanical trouble. Unfortunately for Tazusa, Pete ends up involuntarily inhabiting her body for 100 days.