Light Novel / Gift From The Princess Who Brought Sleep 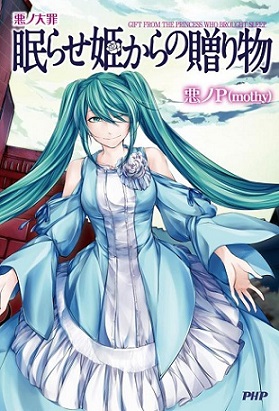 For the sake of your happiness...

Gift From the Princess Who Brought Sleep is the third light novel in the Deadly Sins of Evil series, as part of the Evillious Chronicles. It was written by mothy, illustrated by Ichika, and released in 2014.

An expanded look at the story in a song by the same name, the book is a mystery focusing on the true nature of the supposedly patient and kind Marchioness, Margarita Blankenheim—whose husband Caspar was the first victim of a mysterious illness sweeping through the city of Toragay. The protagonist is Hanne Lorre, an investigative journalist who arrives in the hope of learning more about the legend of the "Flower of the Plateau"—and finds many more dark secrets than she bargained for.

The novel takes place in the Evillious equivalent of the Victorian Era, primarily in Elphegort, showcasing startling new information for the series as a whole both on the criminal organization Pere Noel and the Sloth demon. While the primary focus is on the viewpoint of the protagonist, Hanne, the narrative is punctuated by thoughts from the personal monologue of Margarita Blankenheim. It’s preceded by the Story of Evil series, and in the Deadly Sins of Evil series proper, Evil Food Eater Conchita. It's followed up by Fifth Pierrot.

(note however that it’s all in Japanese), and it can be purchased on Amazon. Registered users who purchase the novel also receive a tie-in short story in their email.