Light Novel / Gargoyle of the Yoshinagas 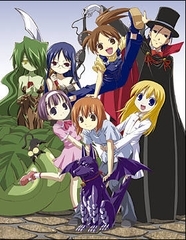 Tomboy Futaba Yoshinaga and her somewhat effeminate older brother find themselves in for a surprise when Futaba wins a prize in her local lottery - a stone gargoyle. Even more surprising, the Gargoyle can talk and declares itself the gatekeeper of the house and soon enough, the city in general. So begins the story of Gargoyle (nickname Gar-kun) and the city's ins, outs and magical happenings.