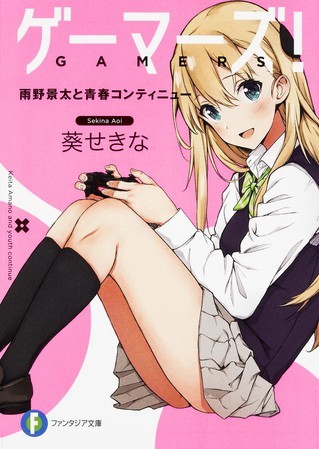 Keita Amano is an friendless second-year Ordinary High-School Student who has nothing but his games. One day, Karen Tendou, the prettiest girl in his school, invites Keita to join the video gaming club that she is the president of. To her dismay, Amano turns down her offer, as he isn't into the ultra-competitive gaming scene her club caters to. And thus begins a string of gaming and romance shenanigans involving Amano and his schoolmates...

Gamers! is a Japanese light novel series by Sekina Aoi, with illustrations by Saboten and published under the Fujimi Fantasia Bunko imprint. It began publication on March 20, 2015 and had its twelfth and final main series volume published on October 19, 2019. It has also spawned a yonkoma manga adaptation illustrated by Tsubasa Takahashi, which was serialized in Shonen Ace magazine from 2016 to 2019.

A 12-episode Animated Adaptation by Pine Jam premiered on July 13, 2017. It is available for legal streaming with subtitles on Crunchyroll here

Not related to the 2006 mockumentary with the same name.