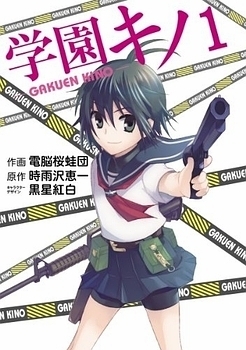 "From my cold dead hands!"
— Kino (after the author finally decides on a transformation catchphrase)
Advertisement:

This work has nothing to do with Kino's Journey.

Gakuen Kino is the story of Kino, an energetic high school student with a big appetite, whose life is changed forever (maybe) after meeting a talking cell phone strap. The cell phone strap, Hermes, tells Kino that the Earth is under attack from enemies that take over humans, turning them into monsters—and it's up to Kino to defend the Earth from this demonic peril.

Kino is joined by a mysterious masked pervert who calls himself the Samoyed Mask, who has absolutely nothing to do with Kino's handsome and chivalrous upperclassman, Shizu. A third character, the vengeance-obsessed Detective Wanwannote "wan wan" being Japanese onomatopoeia for the sound of a barking dog, rounds out the trio—and he's most definitely not Kino's Stalker with a Crush classmate Rikutarou Wanwan Inuyama.

The series incarnation of Kino made an appearance in Memoria Freese as a unit that can be summoned during a rerun of the Travelers and the Labyrinth Country crossover campaign.