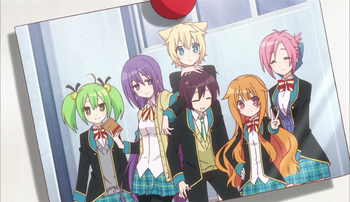 Shinomiya Kyouya is forced to become a new member of the GJ, an unidentified club that dwells in a room of the former building of a certain school. Here he meets the club leader, Mao, a short girl with a big attitude; Mao's younger sister, Megumi, who has the heart of a bipolar angel; Shion, the recognized genius with a lack of common sense, and the always hungry and mysterious Kirara. Time flies with these unique girls around.

GJ-bu (Good Job Club, pronounced "Good Jobbu") is a Japanese light novel series written by Shin Araki and illustrated by Aruya. It was adapted into an anime as a part of the Winter 2013 Anime season.