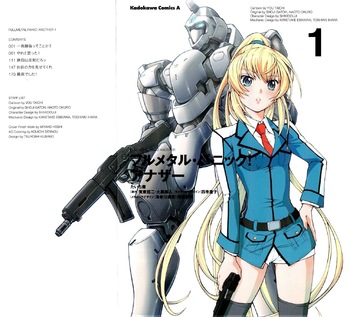 Adelina Aleksandrovna Kerenskaya and her Arm Slave, the Zy-99M Shadow.

Full Metal Panic! Another is the sequel to Full Metal Panic! series, set 10 years after the end of FMPnote If based on the manga/light novels, the show is 10 years after 1998. If based on the anime adaptation, it follows 10 years after 2002. Arm Slaves have become a common sight, not only with various militaries all over the world, but they've been also used for civilian applications, such as the construction industry, where they're known as Power Slaves. Mithril has permanently been disbanded due to personnel losses and facilities destroyed after they were captured/destroyed by Amalgam-led forces with no one to back them. Dana O' Shee Military Service, an American PMC, was established to help militaries who don't have Arm Slaves be trained in their use, not to mention that they provide training service for militaries that want to improve their Arm Slave forces.

Ichinose Tatsuya is a mild-mannered high school student who does part-time work with his father's construction company in order to help him out. It was until he encounters a Russian Dana O' Shee Military Service security contractor named Adelina Aleksandrovna Kerenskaya, who needed help to transport her Arm Slave known as "Shadow". While a military test takes place the JGSDF and DOMS, one of the Arm Slaves goes rogue and starts attacking ASes from both sides. Ichinose agrees to to join DOMS after piloting Shadow in order to save his sister from being nearly killed a rogue AS, not to mention his father has a growing debt problem and his wishes to be an actual AS pilot.

Full Metal Panic! Another consists of the original light novels, which were written by Naoto Ōguro with illustrations done by Shiki Dōji. They were published under the Fujimi Shobo label in Fujimi Fantasia Bunko's Dragon Magazine from August 20, 2011 to February 13, 2016 with a total of 13 volumes. It also had a manga adaptation, with the illustrations done by Yō Taichi, published by Kadokawa Shoten under Kadokawa Comics Ace's Newtype Ace magazine from March 26, 2012 to August 26, 2014 with a total of 6 volumes. Another manga adaption, known as Full Metal Panic! Another Sigma, is published under Kadokawa Comics Ace's Kadokawa Niconico Ace magazine from February 26, 2015 with 2 volumes officially published.

A series of FMP!A short stories were also published, as was a manga.

A Work In Progress.

The series provides the following examples of: