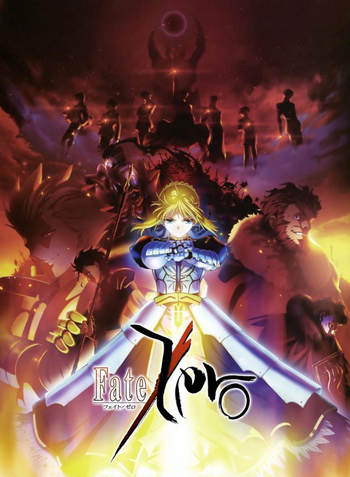 Top register from left to right (Masters): Ryuunosuke Uryuu, Waver Velvet, Tokiomi Tohsaka, Kiritsugu Emiya, Kayneth El-Melloi Archibald, Kariya Matou, Kirei Kotomine; Bottom circle, counterclockwise from upper left (Servants): Berserker, Archer, Lancer, Saber, Caster, Rider, Assassin.
"Let us tell the story of a certain man. The story of a man who believed in his ideals more than anyone else, and by them was driven to despair."
Advertisement:

There exists a plane beyond human conception, within which resides the Throne of Heroes. Here, the souls of both famous (and infamous) individuals throughout history are stored and recorded, to be used as eternal guardians of mankind. The definition of "hero" is broad—even the most ruthless and heartless may have benefited the greater good in the end.

Centuries ago, three families of mages — the Einzbern, Makiri, and Tohsaka — conducted a dark and bloody ritual; Heaven's Feel, the Holy Grail War of Fuyuki. A battle between seven mages, competing for a chance to wish upon a "Holy Grail", the 726th such artifact branded by The Church. Heroic Spirits from the Throne are summoned and bound to the material world, becoming "Servants" to their summoning "Masters". To keep their true names hidden, the seven Servants are sorted into one of seven Classes: Saber, Archer, Lancer, Rider, Caster, Berserker, and Assassin. In addition, each Servant is armed with the mysteries that symbolize their legend and embody their fame — Noble Phantasms, legendary armaments and abilities.

As each Servant falls, the Holy Grail receives their power, until only one remains and the Grail is able to manifest in the physical world to grant the winners' wishes.

Fate/Zero is the story of the Fourth Holy Grail War.

Kiritsugu Emiya grew up wanting to be a hero who could save anyone and everyone... but he learned the hard way that for every person he saved, another had to die. The only way to be a hero was to act for the good of all humanity; to destroy the factor that would destroy even more humans in turn if left unchecked. And if that factor was humanity itself, then he would kill every single one who threatened the peace of another. Despised, feared, branded as a murderer, a contract killer, a hitman — still he goes on, believing that this is the best way to serve humanity.

Due to his immense skill, Kiritsugu is adopted by the Einzbern family as an honorary family member. However, the Einzberns' real motive is to send him to Fuyuki City, his old home, to participate in the Fourth Holy Grail War on their behalf. Despite finding love and happiness with his new family — his wife, Irisviel, and their daughter, Ilya — he knows the battle isn't over. As one of the seven Masters, he must return to Japan to obtain the Holy Grail of Fuyuki for the Einzbern family.

Fate/Zero is a collaboration, a series of four illustrated novels written by Gen Urobuchi (of nitro+ and Madoka Magica fame) and illustrated by Takashi Takeuchi of Type Moon, under the direction of Kinoko Nasu. Set in the Nasuverse, it is the prequel to acclaimed Visual Novel Fate/stay night. The first volume was released in December 2006 and the last was released in December 2007. It was first adapted into a Drama CD, with music by ZIZZ Studio (composers for the majority of nitro+ works). A manga adaptation illustrated by Shinjirō was serialized between 2010 and 2017, and a TV series (by ufotable of The Garden of Sinners fame, with music by Yuki Kajiura, and starring the Drama CD cast) aired its first season in Fall 2011 and concluded in Spring 2012.

The anime was streamed for free with subtitles in eight different languages by Aniplex on Nico Nico as it aired. The episodes are available on Crunchyroll

, in both English audio and Japanese audio with subtitles. The English dub by Aniplex USA, VIZ Media's and Neon Alley service is also currently available on Netflix.

Since this is a prequel series to Fate/stay night, expect major Late Arrival Spoilers for that series as well, as Fate/Zero ends with a Foregone Conclusion. You Have Been Warned.

"Being a hero is a limited-time thing. When you grow up, it becomes harder to call yourself one. I wish it hadn't taken me so long to realize that"﻿
Feedback

During his introduction, Giles De Rais, the Caster seems to be a creepy but kind man, freeing a scared child that his master Ryunosuke Uryuu had sacrificed to him. Just when the boy's about to go free however, Caster reveals his real side, as the boy is ripped to pieces by one of his monsters, as a cruel Hope Spot.

During his introduction, Giles De Rais, the Caster seems to be a creepy but kind man, freeing a scared child that his master Ryunosuke Uryuu had sacrificed to him. Just when the boy's about to go free however, Caster reveals his real side, as the boy is ripped to pieces by one of his monsters, as a cruel Hope Spot.