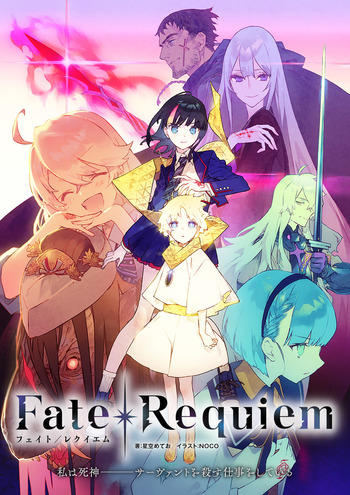 A World After the Holy Grail Warnote Clockwise from bottom: Utsumi Erice and "Pran", Karin and Kijyo Koyo, Manazuru Chitose and Longinus, Koharu F. Riedenflaus and Galahad (Alter)
I am a Reaper...my job is to kill Servants.
Advertisement:

A long time ago, there was a large war. The war led to the rising of sea levels, changing the shape of the world drastically. However, those born after the war and those who survived it are now blessed by having a "Holy Grail" inside them, allowing them to surpass natural causes of death and summon a Servant tied to their fate, as they live their lives being blessed by the Grail.

Within the coastal city of Akihabara, Utsumi Erice is the only person not blessed by the Grail, and instead was born with a collection of evil spirits inside of her. With the evil spirits, she acts as a "Grim Reaper" who kills Servants who break the rules established by the Holy Grail. After one mission, she meets and bonds with a mysterious boy who turns out to be the last Servant summoned into this world. What will her fate be?

Fate/Requiem is a light novel series within the Fate Series, written by Meteo Hoshizora and illustrated by NOCO.

Tropes associated with Fate/Requiem are: