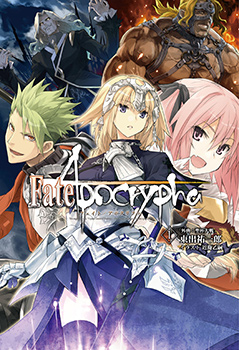 In the name of Jeanne d'Arc, I command thee, fourteen Servants.note Background, clockwise from bottom left: Rider of Red (Achilles), Lancer of Black (Vlad III), Berserker of Red (Spartacus), and Rider of Black (Astolfo). Foreground: Ruler (Jeanne d'Arc).
Her dream would end, and reality would show itself. However, it had not yet ended. Indeed, the girl's dream had come to an end, but that of La Pucelle would start from then.
Advertisement:

Fate/Apocrypha is a Light Novel written by Yuichiro Higashide and illustrated by Ototsugu Konoe set in the Fate universe. It was originally conceived as a joint-project MMORPG by Type-Moon, with the help of several other authors and artists like Gen Urobuchi, but was eventually cancelled when a suitable development partner could not be foundnote at least until it eventually evolved into the mobile game Fate/Grand Order. The concept was later revived as a five-part Light Novel, with two previews published in the Type-Moon Ace magazine. The full first novel was released at Comiket on 29 December 2012. The second novel was released on the 15th of August, 2013, the third on December 29, 2013, the fourth on May 30, 2014, and the fifth and final volume was released on December 30, 2014.

In an Alternate Timeline to Fate/stay night, the world is forever changed when the rebellious Yggdmillennia faction steals the Greater Grail during the Third Holy Grail War and hides it within Trifas, Transylvania. This theft causes the Grail system to go out of control, resulting in a number of smaller "regional" Holy Grail Wars across the world, each presided over by a "Ruler" Servant summoned by the Grails themselves to ensure the rules are obeyed and the Wars do not involve innocent people.

Six decades after the Third Holy Grail War, Yggdmillennia suddenly emerges from hiding and declares independence from the Mage's Association by announcing a new world order where mages of any background and talent, not just those from strong bloodlines, will be allowed to learn the art of magecraft under them. As proof of their authority, a Great Holy Grail War will be held between themselves and the Mage's Association: instead of a seven-way battle royale, two teams of seven Servants will battle each other for the right to claim the Greater Grail.

Jeanne d'Arc is summoned as the designated Ruler of this Great Holy Grail War, and departs to Transylvania where she hopes to adjudicate the battle between the Mage Association's "Red Faction" and Yggdmillennia's "Black Faction". Yet it quickly becomes clear that something is seriously wrong with this Grail War, and its parties will do whatever it takes to seize the ultimate prize for themselves.

An anime adaptation by A-1 Pictures was announced December 31, 2016. It premiered on July 1, 2017, has been licensed for exclusive streaming on Netflix, and ran for 25 episodes. The first half of the series premiered on Netflix worldwide on November 7, 2017

, and the second half premiered in February 2018.

A novel called Fate/Apocrypha: Side of Survivor was released in the second Blu-ray edition which details what happened to the survivors of the Grail War. A sequel called Fate:Lost Einherjar details a new Grail War ten years in the future where each Master summons two Servants.

Ruler finds out, the very awkward way, that the very effeminate Astolfo, The Rider of Black...is a guy.

Ruler finds out, the very awkward way, that the very effeminate Astolfo, The Rider of Black...is a guy.