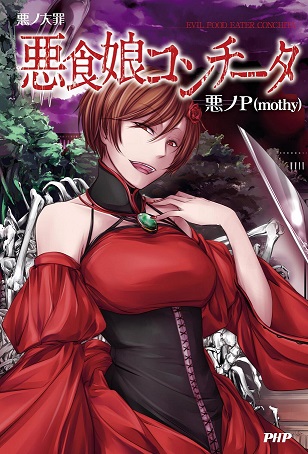 "Praise and worship our great Conchita"

Deadly Sins of Evil: Evil Food Eater Conchita is a Light Novel in the Deadly Sins of Evil Light Novel series of the Evillious Chronicles franchise. It was written by the Japanese producer Akuno-P (mothy) and illustrated by Ichika, released 2013. The story was marketed along with a short story, “Gloom of Held”, taking place during the events of the novel.

A deeper look into the story of the song of the same name, the novel centers around the birth, life, and death of Banica Conchita, a Duke of Beelzenia whose opsomania becomes deranged (not to mention Banica herself becoming deranged) after making a contract with the Demon of Gluttony. Meanwhile, the sorceress Elluka Clockworker continues on her quest to find and seal all seven of the Seven Deadly Sins.

The novel takes place in the waning years of the Beelzenian Empire, set against the tumultuous political change in the region and containing revelations that carry over into the Story of Evil; the novel is preceded by Deadly Sins of Evil: The Lunacy of Duke Venomania and followed by Gift From The Princess Who Brought Sleep.

(note however that it’s all in Japanese), and can be purchased on Amazon.