Light Novel / Even Though I'm a Former Noble and Single Mother 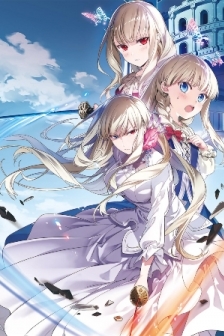 Behold Demon White Sword Shirley and her twin daughters, Tia and Sophia.
Full Title: Even Though I’m a Former Noble and a Single Mother, My Daughters Are Too Cute and Working as an Adventurer Isn’t Too Much of a Hassle
Alternative title: Moto Kizoku Reijou de Mikon no Haha Desuga, Musumetachi ga Kawaii Sugite Boukenshagyo mo Ku ni Narimasen; Moto Musu; Motomusu; 元貴族令嬢で未婚の母ですが、娘たちが可愛すぎて冒険者業も苦になりません
Author(s): Yukari Higa, Taikoban, MuraSynopsis: A world where monsters run rampant. A noblewoman falls from grace and loses everything after being falsely accused. But, she started a fresh life as an 'Immortal'. She became an adventurer capable of defeating disaster-rank monsters and taking the heads off ancient dragons with a single swing of her blade. However, behind that cool exterior... beats the heart of a ridiculously over-indulgent mother!? “What should I do, my daughters are just too cute!?” She wields her deadly sword for the sake of motherly love! Ogres flee and dragons tremble at the sight of this overpowered adventurer! The fantasy adventure of the Doting Mother Sword Demon begins now! Now has a manga adaptation.