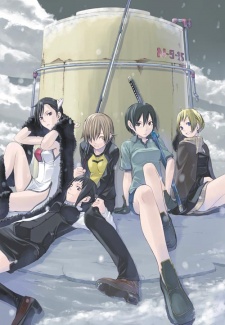 In the middle of the longest bridge in the world sits an abandoned artificial island. Long forgotten by its creators, it is now a lawless wateland split into multiple districts, in which conflict is always imminent. Home to societal drop-outs, runaways, organized crime families, serial killers and its own generation of children, the island becomes the stage on which many people come and go to live out their stories.

Part of Ryohgo Narita’s overarching Verse of light novels that includes Vamp, Baccano!, Durarara!!, and Hariyama-san, the Etsusa Bridge series is chronologically the last series in the verse, and is complete with 4 volumes and 1 collection of short stories.

Tropes in Etsusa Bridge include: