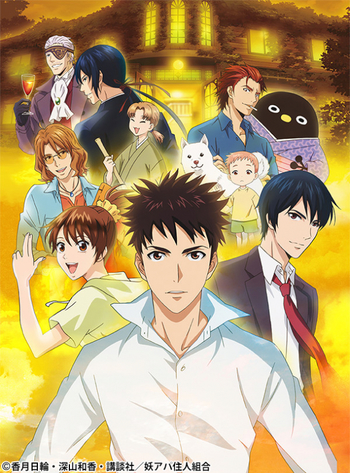 Ever since he was young, Yushi Inaba wasn't particularly interested in the works of Yōkai. Rather, he is more concerned about real-life issues, such as his school life. Having graduated from middle school, he looks forward to moving in to the high school dorm, away from his uncle's family who, despite of taking him in after his parents' deaths, are obviously not very fond of him (except his aunt).

But everything changed when the dorm burned down.

Having no other option, Yushi decides to move into a cheap apartment called Kotobuki-sō, for 25,000 yen (about $221). Of course, it turns out it is 2 Good to Be True, as the place is filled with all kinds of supernatural beings from Japanese folklore. Fortunately, the other residents aren't exactly all that bad, and Yushi therefore decides to stay in the Kotobuki-sō, beginning a rather unorthodox high school life.

Elegant Yokai Apartment Life (妖怪アパートの幽雅な日常 Yōkai Apāto no Yūga na Nichijō) is a Japanese light novel series written by Hinowa Kōzuki. The novel was first released in 2003, and concluded in 2009 within 10 volumes. Additionally, a side-story collection was released in 2013. A manga adaptation ran in Monthly Shonen Sirius from 2011 to 2021.