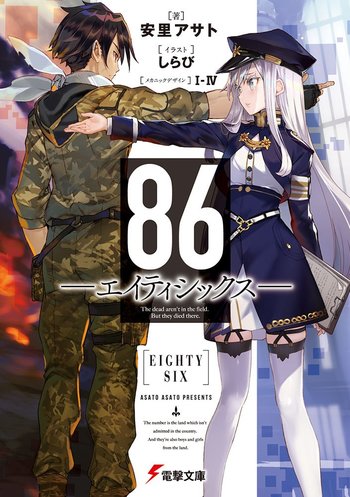 A War Without Casualties

86 is a Military Science Fiction Light Novel by Asato Asato, illustrated by Shrabii, and mech design by I-IVnote Fate/Grand Order players might recognize the artist for drawing Charles Babbage, Orion, and Anne Bonnie and Mary Read, which follows the story of Major Vladilena "Lena" Milizé as she's given command of a veteran Eighty-six squadron which, for some reason, goes through their handlers like crazy, including some that committed suicide, and how the unit's leader, Captain Shinei "Shin" Nouzen, might have something to do with it. All the while Lena has to battle institutional racism and gaining acceptance with the squadron who, understandably, does not recognize her as one of their own, even as she's trying to keep them alive.

Three volumes have been released in English so far by Yen Press. The web novel side stories can be found here

A TV Anime Adaptation has been confirmed

Warning: Unmarked spoilers for Volume 1 below, due to First Episode Twists required to discuss any future volumes.