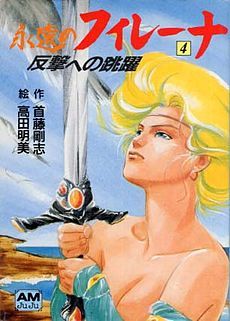 You might want to sit down for this one. Are you sitting? OK? Good.

First, the basics: Eien no Filena (Eternal Filena) is a series of Light Novels that ran from 1985 to 1994 and was later adapted into an RPG for the Super Famicom in 1995... in Japan. It was never released overseas. And if you're wondering why, simply read on...

Filena is a girl living in The Empire of Devis. However, she has been raised as a boy nearly all her life by her adoptive grandfather/master Zenna, specifically so that she can compete in the brutal Battles the Empire holds. She is one of the Clechia caste—slaves and second-rate citizens in the empire—and battling is probably the better life, considering the alternative is probably being a concubine. Sound normal so far? Keep going.

Right before her battle debut, Filena is given a concubine named Lila to make her potentially last hours more pleasurable. After beating around the bush a little, Filena finally reveals her secret to Lila. Lila is only moderately perturbed, and, after Filena wins her first battle, moves into Filena's house and becomes her "wife."

Things start going pear-shaped after Filena is forced to, in succession, kill a man the Battle Writer claims is her brother (hint: He's not) and her master, Zenna. Her not-brother had a wife and child, who now have it in for her. And her master hands her a mystic pendant, which contains a video file explaining that Filena is the heir to a long-lost sea kingdom. Then, naturally, Filena and Lila go on the run, tailing the Battle Writer, the dead man's wife, and, eventually, many more as they become embroiled in the rebellion against the Empire.

And to top it all off, the entire time, Filena's "disguise" becomes increasingly more transparent while never actually losing its effectiveness. Even with a name like "Filena." Even with Lila—who knows Filena's secret from the very start, and becomes yet ever more insistent on calling Filena her "husband..."

Yes, it's that kind of series.

Although never released in the US, a fan translation patch for the game is available.