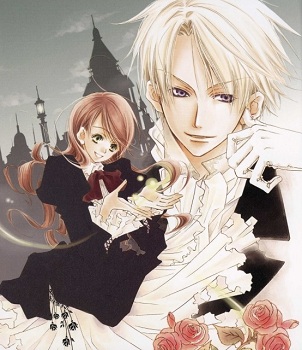 Lydia and Edgar
Edgar: Raven, can you think of any girl's name I would say in my sleep?
Raven: Yes.
Edgar: Let's hear it, then.
Raven: Shall I go in alphabetical order?
Edgar: On second thought, maybe not.
Advertisement:

The story, set in Victorian England, follows Lydia Carlton, a 17-year-old girl who is a "Fairy Doctor"; human beings with an innate ability to not only see fairies but communicate with them, as well. As the world travels farther into the modern age, Fairy Doctors are becoming rare and people have all but stopped believing in such "fairy tales". Lydia vehemently protests against the denial of their existence, even if it might ostracize her.

Her life suddenly takes a 180-degree turn when she meets Edgar J.C Ashenbert, a man claiming to be a successor to becoming the "Legendary Blue Knight Count" and his crew on a sea voyage to London. Edgar hires her as an advisor during his quest to obtain a treasured sword, that was supposed to be handed down to him by his family, which is needed to solidify his recognition as the Blue Knight Earl by the Queen of England.

Originally an ongoing light novel series, Earl and Fairy (Hakushaku to Yousei in Japanese) was published from 2004 to 2013 with a total of 33 volumes. It was adapted into an anime at a mere 12 episodes; the anime aired from September 28 to December 23, 2008. There is also a four-volume manga and a PlayStation 2 visual novel game titled Hakushaku to Yōsei: Yume to Kizuna ni Omoi o Hasete.