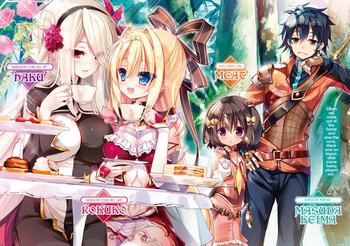 The initial crew and their benefactor, Haku.
“Hey, hurry up and massacre those bandits!”
Advertisement:

Spending my daily life in leisure, that was my pastime—until I was summoned into another world and met a blonde loli introducing herself as Dungeon Core No. 695.

“Save my dungeon. By the way, if the dungeon core is destroyed, you’ll also go down with me as the dungeon master.”

A dungeon with a single room. Moreover, one already controlled by bandits. This is a [Checkmate] no matter how you look at it. Guess there’s nothing to do but somehow get out of this situation so that I can [Not Work]!!

Originally a Web Novel, it had been picked up by OVERLAP and became a Light Novel with slight differences between them (although the Light Novels have regularly received extra content starting with the third volume). It is written by Supana Onikage and illustrated by Youta.

It is also known as I absolutely don’t want to work as a dungeon master until I indulge in my laziness (絶対に働きたくないダンジョンマスターが惰眠をむさぼるまで; Zettai ni Hatarakitakunai Dungeon Master ga Damin wo Musaboru Made) and Lazy Dungeon Master.

Tropes in the series.