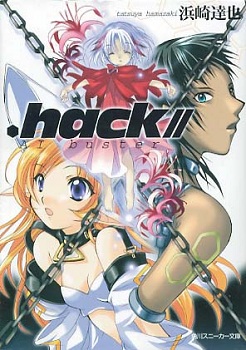 A two-volume light novel series of the .hack franchise.

The first volume is one of the first entries chronologically, taking place before .hack//SIGN and after .hack//Epitaph of Twilight. It follows a solo player, Albireo, as he encounters a strange female NPC in an otherwise average dungeon in The World. The NPC seems quite abnormal - it's voiced, and acts as if it can respond to his speech. Compounding this oddity is his being forced into a party by a manic girl named Hokuto during an invasion event in a root town. With that, he has to find a way to finish the NPC's quest.

AI Buster 2 is a collection of short stories which pertaining to both the original AI Buster and Legend of the Twilight: