Light Novel / Do You Love Your Mom and Her Two-Hit Multi-Target Attacks? 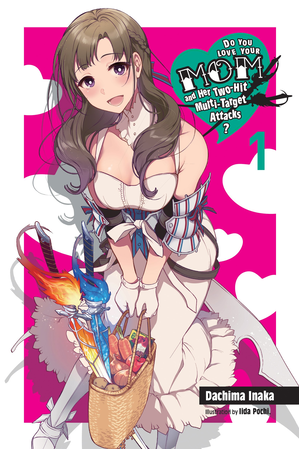 Do You Love Your Mom and Her Two-Hit Multi-Target Attacks? (Tsūjō Kōgeki ga Zentai Kōgeki de Ni-kai Kōgeki no Okā-san wa Suki desu ka?) is a fantasy Light Novel series written by Dachima Inaka and illustrated by Pochi Iida (of The Elder Sister-like One fame). It was serialized by Fujimi Fantasia Bunko from January 2017 to April 2020. This series earned a bit of huge

due to a deliberately provocative plot and a parody of the current incestuous fashion in light novels. Ultimately, this led to the publishing house being able to sell the first two volumes in excess of 100,000 copies within a few months and win the Fantasia Grand Prize.

Masato Oosuki is a teenager who is embarrassed by his loving but smothering mother Mamako. One day, after filling out a survey, he gets transported to a fantasy world inside an online game and becomes excited that he's finally free of his mother and will get to be a cool hero. To his shock, Mamako gets transported to the world too and quickly overshadows him in skill and power. Masato has no choice but to travel with her.

A web manga adaptation was serialized in Young Ace Up from September 2017 to January 2021. Both the light novel and manga are licensed in North America by Yen Press and an Animated Adaptation aired from July 13 to September 28, 2019. An OVA episode was released on March 25, 2020. The trailer