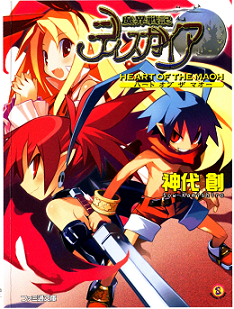 Cover of the 9th novel
The Disgaea novel series is an expanded universe of the Disgaea game series. It starts with an adaptation of the first game and continues with its own thing, and adaptations of the sequels were added to the universe as the games got released. The novels introduce Laharl’s aunt, uncle and cousins, Flonne’s family as well as Gordon and Jennifer’s daughter. For more information about them check out the Character Sheet. The novels are quite the fun read, but they have unfortunately not yet been released state side. Broccoli Books, who was going to release the novels, shut down before they even got to release the first one. The novels are written by Sow Kamashiro and illustrated by Keiji Yamamoto under the name Chou Niku.
Advertisement:

There are currently 17 novels in the series:

In addition to the games series, the novel series provides examples of: