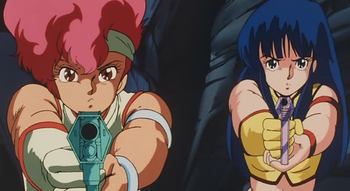 You will remember to call them "Lovely Angels", won't you?
(Kei on the left, Yuri on the right)
"It's not our fault!"
Advertisement:

It is roughly AD 2141. Humanity has abandoned Earth and spread across the galaxy, but that doesn't mean we left our problems behind. In fact, there are quite a lot of them, and some of them are worse than people could have dreamed of before going into space. An Heroes "R" Us agency of the galactic government called the Worlds Welfare & Works Association ("3WA") has its own special way of dealing with these problems — it dispatches teams of highly-trained, well-equipped troubleshooters, called "Trouble Consultants", to find the trouble and, well, shoot it.

One of the most successful teams of Trouble Consultants is the "Lovely Angels", two college-age girls who have a near-perfect success record. However, they also have the rather unfair reputation of blowing up everything they touch (for the record, only a third of their missions have ever ended with something being blown up, and it's never actually their fault), which has led to their unofficial and hated nickname of the "Dirty Pair". On the other side of matters, a list of the things they have accidentally destroyed would include a number of inhabited planets, so it's not as if their infamy is wholly undeserved.

and released by Nozomi Entertainment. Nozomi followed up by re-releasing the movie, the original OVAs, and Flash in 2012, including both the ADV Films and the Streamline dubs (where applicable). The TV series was available on YouTube (via Manga Entertainment for Nozomi) and DVD, but all but the first two episodes disappeared after Nozomi lost the license.

which was collected in two volumes. The artist for this version was Hisao Tamaki, who is most famous for the manga adaptation of Star Wars: A New Hope published by Dark Horse Comics. In April 2019, Seven Seas Entertainment announced that they had licensed the manga for release in December 2019 as an omnibus collection. On October 1, 2021, the TV series premiered on Crunchyroll and Retro Crush. In addition, Nozomi has announced a kickstarter to release the franchise on Blu-ray, as well as produce an English dub for the original TV series.