Light Novel / Didn't I Say to Make My Abilities Average in the Next Life? 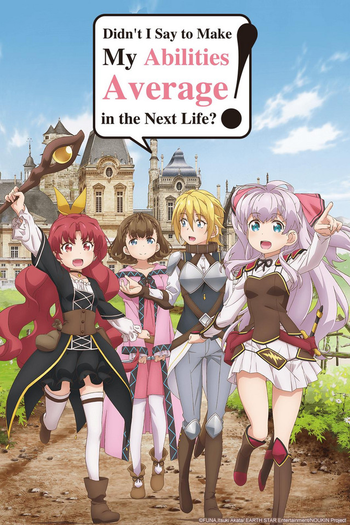 From Left to Right: Reina, Pauline, Mavis and Mile
Advertisement:

All Kurihara Misato ever wanted was to be normal. For her entire life, no one would even try to be friends with such a superior person. When she graduated top of her class, ready to enter the top university, she thought at last she'd find people who wouldn't be intimidated. But as she left, she saw a little girl fall in front of a truck, dove to save her, and found herself in a "heaven-like place" in front of a "god-like being". Thanking her for saving the child, he offers to reincarnate her in a magic world with any powers she wants, to which she immediately replies "Please just make me average to this new world!".

Thus begins her new life as Adele von Ascham, later known as Mile, a noble girl desperate to live a normal life as a normal girl, and find normal happiness by her own efforts. Unfortunately, this "god-like being" decided to "average" across all living beings in this world and gave her half the physical and magical power of an Elder Dragon, roughly 6,800 times that of a normal human, along with making her a mid-ranking noble and thus higher in social status than the majority of humans.

An anime adaptation aired in Fall 2019 directed by Masahiko Ohta, his first adaptation since Yoake Mae Yori Ruriiro Na in 2006 that isn't a Slice of Life. Crunchyroll licensed the series worldwide outside of Asia.

Didn’t I say to list the tropes in this light novel?