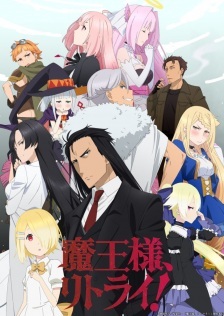 "Nothing is impossible for the Great Empire!"
Going for the top with all I've got...
Maybe I can do that, like, twice in my life.
Why twice?
So I have another chance to clock the bastard in the face.
...Akira Ono, Memorial
Advertisement:

Oono Akira is a Ridiculously Average Guy and game developer that created a successful MMORPG called Infinity Game. One day, he gets transported into a world similar to Infinity Game in the avatar of his character, Demon Lord Hakuto Kunai. With his presence upsetting the balance of power in this new world, he begins to unravel the mystery of who summoned him and why, and whether returning to his own world is possible. Along the way, he meets several companions such as the Aku, Holy Maiden Luna and several others, including characters that he himself designed.

Demon Lord, Retry! (Maou-sama, Retry!) started out as a Web Serial Novel by Kurone Kanzaki on the website Shousetsuka ni Narou in 2016 and began publication as a series of Light Novels with illustrations by Kouji Ogata in 2017. A manga adaptation began serialized in October 2017, and an anime adaptation was released for the Summer 2019 Anime block, streaming on Funimation and Hulu. Both the light novels and the manga are licensed in English by J-Novel Club.