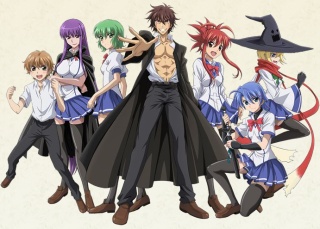 The Future Demon King and his harem (and his brown-haired friend.)
Advertisement:

Akuto Sai is an orphan raised by a church who plans to become a great priest one day. Everything seems to be going so well at first: He possesses great magic power, is planning to go to school at the Constant Magic Academy, and even made friends with the Class Representative Junko Hattori on his first day. However, when Akuto goes in front of the vocational raven to determine his future, the raven proclaims that he will become the next Maou (a.k.a. "Demon King"). The original Demon King who appeared 100 years ago sought to tear apart the current order of the world and was so powerful that he nearly succeeded before he was finally brought down, so this is not a good thing.

As expected, this revelation quickly spreads around the school, but Akuto can't see himself becoming the next Big Bad of the world, so he does everything in his power to convince his friends and classmates that he won't become the Maou. However, a string of unintended consequences follows as Akuto's actions only dig that metaphorical hole deeper. As the story goes on, he ends up gaining a harem of followers ranging from a young fanboy to a robotic private detective who all have their own reasons for wanting to see whether or not Akuto will become the Demon King. Meanwhile, Bouichirou Yamato, leader of the Cabinet Intelligence Magical Office (CIMO8), seeks to bring down Akuto for the good of the world- by any means available to him.

Originally a series of light novels, Ichiban Ushiro no Daimaou has received both a manga and anime adaptation. The anime aired in the spring of 2013.

The anime can be viewed legally on Crunchyroll here.