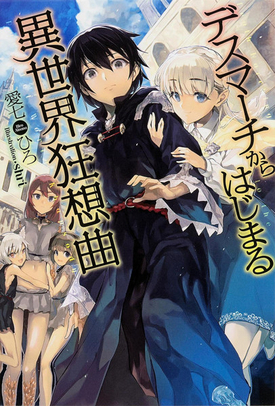 Death March to the Parallel World Rhapsody (''Death March kara Hajimaru Isekai Kyousoukyoku), is a Japanese novel series by Hiro Ainana. Originally serialized as a Web Novel, it eventually received a Light Novel rewrite with illustrations by shri and an English translation by Yen Press starting in 2017.

Due to a co-worker suddenly disappearing without notice, 29 year old programmer Ichirou "Satou" Suzuki has spent the last month on a programming "Death March", an endless stream of coding and debugging over 80+ hour work weeks, to put out a new release of a mobile game his company was contracted to finish. After finally pushing the release out of QA, Satou curls up under his desk to get some well-deserved rest... and wakes up to find himself in a fantasy world still in his casual clothes but 15 years younger, with a screen telling him he's currently at level 1 and has a 3 time use spell called "Meteor". Satou soon use out this meteor spell in self defence, only to watch it accidentally destroy an entire civilization of dragons and gain him untold amounts of experience and loot in an instant.

With no idea what he's doing there and enough power that seemingly nothing can threaten him anymore, Satou decides he might as well go on a much needed vacation, and begins a sightseeing tour around this new world. Now Satou and a growing menagerie of companions try to see the sights, while stumbling onto wars between gods and demons, medieval political intrigue, and more along the way.

Also has an ongoing manga adaptation by Ayamegumu and a 12-Episode Anime adaptation that aired during the Winter 2018 anime season.