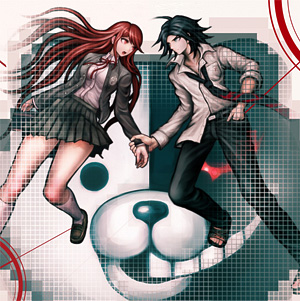 I can't remember anything from before I lost like memory, so it's not like I have anything to compare it to. That's why I don't see my forgetfulness as a disadvantage... it's just a part of who I am.
— Ryōko Otonashi
A two-volume Light Novel for the Danganronpa franchise set before the events of Danganronpa: Trigger Happy Havoc and Danganronpa 2: Goodbye Despair. Released in 2011, Danganronpa Zero was written by franchise creator Kazutaka Kodaka and illustrated by franchise illustrator Rui Komatsuzaki.
Advertisement:

Ryōko Otonashi is a student attending Hope's Peak Academy—an elite private school in Japan that only accepts "Super High-School Level" students: the best of the best of the best, regardless of niche. Unfortunately, she suffers from anterograde amnesia and forgets things mere minutes after they occur. To function in day-to-day life, she carries around a memory notebook filled with information written by herself about events and people in her past.

Thanks to her disorder, Ryōko has only managed to retain one memory: that of her doctor and (implied) childhood friend, the "Super High-School Level Neurologist" Yasuke Matsuda, who is studying her amnesia in the hope of helping her recover.

Meanwhile, a sinister plot takes shape in the shadows of Hope's Peak Academy. Junko Enoshima is laying the groundwork for her plan to send the world spiraling into despair, and the scheme is linked to "The Tragedy of Hope's Peak Academy." As a few students attempt to uncover the truth, they face not only the culprits behind that tragic event, but also a cover-up being arranged by the highest officials of Hope's Peak Academy—the Steering Committee. In the middle of all this is Ryōko, who is dragged into the conspirators' plans by forces beyond her understanding or control.

is being provided in the Let's Play at the Something Awful forums, in tandem with the Danganronpa 2 translation effort. A mirror of the thread can be found here

with the remaining chapters of the second book here

Another, complete full translation of both volumes can be viewed here

In 2018, a fan game of the novel began production. The demo can be viewed here