Light Novel / Dances with the Dragons 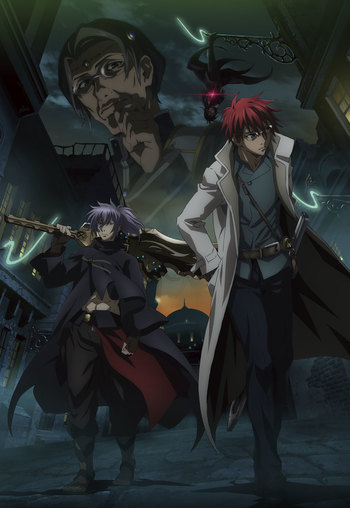 A long time ago, only dragons could use magic and used it to terrorize humanity, until humanity discovered a way to channel magic through jushiki, specialized formulas that can alter the world's laws. People capable of using such power came to be known as jushikiists. Long wars between humans and dragons followed until a peace treaty was enforced years later, starting an age of fragile peace. Gayus Levina Sorel and Gigina Jerde Dolk Melios Ashley Boeuf are two jushikiists who take requests from a variety of clients.
Advertisement:

Dances with the Dragons (されど罪人は竜と踊る, Saredo Tsumibito wa Ryuu to Odoru) is a light novel series, written by Labo Asai, starting publication in 2003. It was originally published by Kadokawa Shoten until 2008, where Shogakukan has published the series to the present day, featuring 21 volumes. An Animated Adaptation by Seven Arcs Pictures premiered on April 5, 2018. It can be watched legally on Crunchyroll.

Not to be confused with A Dance with Dragons.

Dances with the Dragons provides examples of: