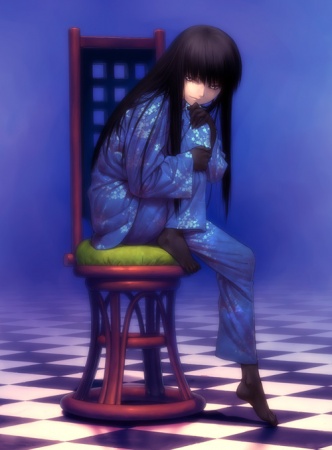 DDD. Decoration Disorder Disconnection. A set of novels by Kinoko Nasu that explores the notion of "Demonic Possession". No direct connections to the rest of the Nasuverse yet.

In a certain part of Japan, there is a syndrome known as Abnormal Agonist Syndrome. A bizarre illness that blurs the line between physical and mental, it usually only affects people who are already in a sorry state - people who are suicidal, paranoid, abused, and so on. Infectees at best end up with incomprehensible thought processes and at worst go completely, utterly insane. Oh, and they also tend to gain superpowers and horrifically altered bodies. These psychosis and powers are tailored to whatever caused them to develop AAS in the first place - take for instance, the suicidal Starter Villain Kizaki. Physically, he gained a neck capable of rotating 360 degress and the ability to force people who have looked into his eyes to mimic his actions, while mentally, he became completely disconnected from the world and simply sat in front of his mirror endlessly rotating his neck, convinced that he was breaking it and would soon die, and was totally unaware that he was causing anyone nearby to kill themselves. Of course, the general population doesn't really know this. As for as most are concerned, what's actually happening is that people are being possessed by demons. All of this takes place in Shikura City - to combat this outbreak, the city government has made the Origa Memorial Institute the main hospital for anyone affected by AAS.

Also, the real demons are a little bit upset by these people stealing their thunder. Well, technically, demons aren't real. Neither are what most Agonists turn into. It takes something unreal to fight something unreal. Confused yet? Yeah, this series will do that.

Arika is a survivor of an Agonist attack (by his sister Kanata, as it happens) with one arm who is considered both rather harmless and one step away from being an Agonist himself. He was kept in Origa for a couple years while the doctors there examined him to make sure there were no lingering issues. Slightly odd, he'll comment that one should never tell him anything serious during daylight hours, and nothing silly at night - this is because he has a strange mental defect that causes him to lose all his memories of the day at nightfall, and as such, he can only remember things that happen to him at night. He is employed by a rather bizarre and sadistic yet beautiful boy named Kaie Karyou, who claims to be a "Demon Master." His only job is to put on and take off Kaie's prosthetic limbs, something for which he is paid 200,000 yen ($1600) per month.

Two volumes are compiled and there is a side story called "3/16 Incident: Outside the Universe". There is supposed to be a third volume, but there's no word on when it will come out. As of April 2020, it's in Development Hell.