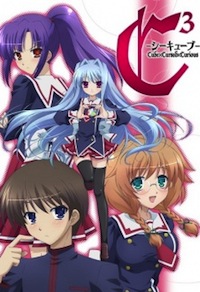 Cube×Cursed×Curious, which can be shortened to C Cube or C3, is a Light Novel series written by Minase Hazuki and illustrated by Sasorigatame, which was published under the Dengeki Bunko imprint from 2007 to 2013 for 17 volumes. It has since been adapted into a manga by Akina Tsukako (which was serialized in Dengeki Daioh from 2011 to 2013) and a Fall 2011 Anime by SILVER LINK.

Haruaki Yachi is yet another Ordinary High-School Student, noteworthy only for being highly resistant to curses. Because of this ability, his Walking the Earth father frequently sends him cursed tools and items he finds during his travels to be purified, as their home is built on sacred ground that erodes negative energy, and Haruaki is able to safely keep watch over these troublesome items.

One day, he receives a strange metallic cube, which he decides would be better left alone. That night, he wakes up to find a naked girl eating rice crackers in his house. The girl's name is Fear, and she is, in fact, the cube itself, an Artifact of Doom that brings painful death to her bearer and all those close to him. Having gained a human form and human emotions, she wishes to be freed from her curse. Haruaki agrees to help her, and she begins living with him and Konoha, another sentient cursed artifact, but none of them realize the true extent of the problems Fear's curse presents, both directly and indirectly.

If you're going to check out this anime, keep in mind that it has a highly Non-Indicative First Episode, and thus you won't get a good impression of what the show's about until the plot picks up in the second half of Episode 2. Try to watch it at least up to that point before deciding whether or not this is a show for you. But, unfortunately, since 2013, it still only has one season.

Not related to another anime shortened to [C].