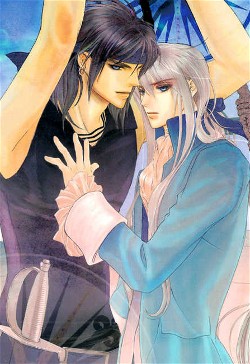 "I want to see more...his rage, his sadness, and every other emotion. What is this feeling?"
— Ayace
Advertisement:

Corsair started as a light novel series, which expanded into several audio dramas and a three volume manga, written by Minami Fuuko and illustrated by Misono Erii. The story follows two members of the pirate clan, Preveza, at a time when its former allies have severed all ties. Ayace "The Devil Killer" Malik, is the commander of the armada, and one of the main reasons Preveza continues to control the Morea Sea after the loss of their former leader. Canale, the blind chief strategist, was taken in by the former leader like Ayace, but conceals a much more sinister past.

After an unusual encounter during a hostage exchange with the governor-general of Korladan, Ayace follows Canale out of suspicion. Canale, who is trying to run away, is attacked, drugged and sexually assaulted by a Sharq Amuji assassin until Ayace finds them and kills the other man. After refusing Canale's pleas to kill him too, Ayace decides to take advantage of him in his drugged state.

Afterwards Canale reveals that he is a former Sharq assassin and escaped to Preveza after having killed the man he loved, Sesaam Zaiyaun, the attorney-general of Pisare. Fearing his past has finally caught up to him, he requests that Ayace either let him leave or kill him before he brings danger to Preveza. Ayace refuses and knocks him out and brings him back to the ship.

Their (dubiously consensual) relationship continues and is finally made public when the princess of the Preveza clan, Aura, states her intention to marry Canale, and Ayace decides to bluntly announce why she can't. This inadvertently leads to Aura going off in a tiff and getting kidnapped by the governor of Korladan in revenge. It turns out he is actually Canale's brother, whose attempts to kill him as a child led to both Canale's blindness and being picked up by the Sharq. The general plot for the rest of the story revolves around rescuing Aura, but the focus is mainly on Canale confronting his past once more, now both helped and hindered by Ayace.