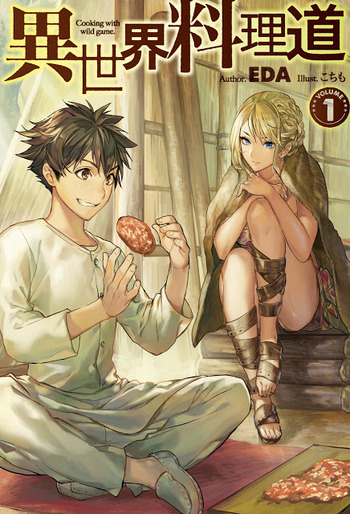 A rare quiet moment between Asuta and Ai Fa.
Cooking with Wild Game is an Isekai light novel (later adapted into a manga) written by EDA and illustrated by Kochimo. It was localized in December 2018 by J-Novel Club.
Advertisement:

Apprentice chef Asuta Tsurumi jumped into a sea of flame in order to save his father's precious kitchen knife. When he came to, he found himself in an unfamiliar world. After arriving at a settlement at the edge of the forest with a female hunter, he was surprised by how backwards the food culture was. And so, Asuta who was passionate about cooking started a food revolution in this different world, so he could let the people here feel the joy of 「eating」! An appetizing light novel about food in another world makes its debut!