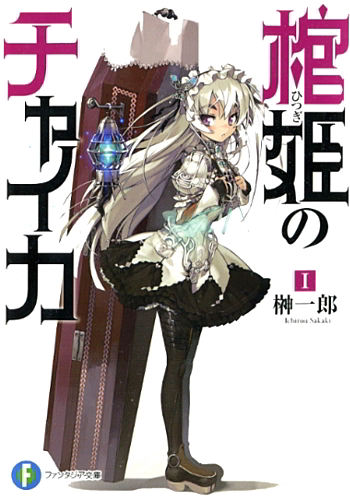 When I saw her, I thought I saw the chance to end this listless, peacetime life...
Advertisement:

It's been five years since the defeat of Arthur Gaz, ruler of the Gaz empire, when a group of heroes finally confronted the evil monarch in his own throne room and slew him. The world has since then experienced a relative period of peace, but for those whose lives revolved around conflict, the transition to peacetime was anything but easy.

Toru Acura was one of these unfortunates. A former Saboteur, the years since the fall of the Gaz Empire have not been kind to him, and for the most part, he'd spent most of it moping in the home he shared with his adopted sister Akari. For all her disturbing devotion to her older brother however, even Akari's patience had its limits, and when it finally came to the point where Akari started to seriously consider having him taken to a taxidermist and stuffed, Toru decided then and there that it was about time to go out again into the world that had since rejected him.

And then, as he was foraging for edible plants in the mountains around his hometown, he encounters a strange girl with long white hair, who spoke in halting Common, and who carried a coffin on her back... And in the process it seems that he's gotten another chance to experience the life of battle he never thought he'd experience again.

Coffin Princess Chaika (棺姫のチャイカ Hitsugi no Chaika) is a light novel series written by Sakaki Ichirou (who also wrote Scrapped Princess, Magician's Academy, and Outbreak Company) and illustrated by NamanikuATK (from nitro+, who illustrated Full Metal Daemon Muramasa and some Attack on Titan spin-offs), published by Fujimi Shobo under its Fujimi Fantasia Bunko imprint. The series concluded in March 2015 with 12 volumes and an epilogue. A 5-volume manga adaptation by Sakayama Shinta is also complete and has been licensed for English release by Yen Press beginning in June 2015, and it covers the first two novels. An anime adaptation aired as part of the Spring 2014 Anime season, beginning on April 10, 2014, and a continuation called Hitsugi no Chaika: Avenging Battle aired in the Fall 2014 Anime season. It's available on Crunchyroll.