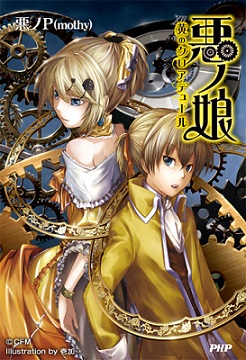 The Daughter of Evil: Cloture of Yellow is the first Light Novel in The Daughter of Evil series of the Evillious Chronicles franchise. It was written by the Japanese producer Akuno-P (mothy) and illustrated by Ichika, released 2010. In 2014 PHP made a re-release of the novel with several revisions from mothy which expanded on several scenes.

The novelization of the Story of Evil song series, the story concerns the tyrannical Princess Riliane Lucifen d'Autriche, whose cruel and petty reign promotes political conflict and sparks a revolution among her citizens. The story centers around her long lost twin brother turned servant, Allen Avadonia, who has sworn to protect her — it also focus on his foster sister, Germaine Avadonia, who has sworn to dethrone her.

The story is set in the Evillious equivalent of France and draws inspiration from the French Revolution, while beginning a saga that hints at a much deeper story for the franchise on the whole.

The story, in addition to its P.O.V. Sequel Wiegenlied Of Green, has now received a manga adaptation by Ichika, the first volume of which is fan translated here.

The website for the novel can be found here

(note, however, that it's all in Japanese) and is available on Amazon. An unofficial English translation for the light novel's revised version is available here