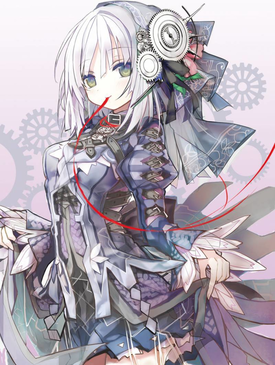 A long time ago, the Earth had died. Humanity was on the brink of extinction, until out of the blue, a mysterious man appeared. His name is "Y", and he proposed to reconstruct the entire Earth using nothing but clockwork gears. And thus, the Clockwork Planet is created.

Naoto Miura is a high school failure who seems to only care about clockwork machines above all else, but what people don't know about him is that he has an extraordinary ability to hear and feel gears in motion, even from very long distances. Then, one day, a random container falls into his home, and inside the container is a clockwork automaton he has never seen before. With beautiful white hair, smooth skin, and a personality that can pierce through the hearts of many, her name is RyuZU, and with their faithful encounter begins a journey to discover the truth about the world around them.

Clockwork Planet is a series of light novels, written by Yuu Kamiya (No Game No Life) and Tsubaki Himana and illustrated by sino, composed of 4 volumes. The light novels were licensed by J-Novel Club on June 1st, 2017 with the first volume getting chapters posted online as they're translated before a full ebook release in August 2017. You can read the light novels as they're released here

An anime adaptation by Xebec aired in the Spring 2017. A manga adaptation illustrated by Kuro commenced in 2013 and ran until 2018, compiled into a total of 10 volumes.

and dubbed on FUNimation here