Light Novel / Classroom of the Elite 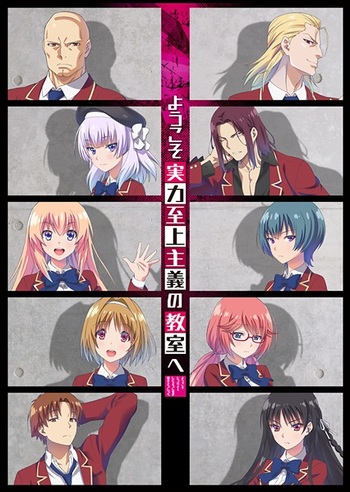 In the not too distant future, the Japanese government has established the Tokyo Metropolitan Advanced Nurturing School, dedicated to instruct and foster the generation of people that will support the country in the future. The students there have the freedom to wear any hairstyle and bring any personal effects they desire.

Our protagonist is Kiyotaka Ayanokōji, a quiet, unassuming boy who is not good at making friends and would rather keep his distance. He is a student of D-class, which is a Dustbin School, except it's a single class a.k.a where the school dumps its inferior students, in this case, in order to ridicule them. After meeting Suzune Horikita and Kikyō Kushida, two other students in his class, Kiyotaka's situation begins to change.

Classroom of the Elite (ようこそ実力至上主義の教室へ Yōkoso Jitsuryoku Shijō Shugi no Kyōshitsu e, "Welcome to the Classroom of the Supreme Ability Doctrine") is a Japanese light novel series written by Syohgo Kinugasa and illustrated by Shunsaku Tomose. It started publication on Media Factory on May 25, 2015, and has so far spawned 10 volumes with a sequel novel series covering Year 2 ongoing. An anime adaptation by Lerche is available for legal streaming with subtitles on Crunchyroll here

. A second season for the anime began airing as a part of the Summer 2022 lineup.

Classroom of the Elite contains examples of: