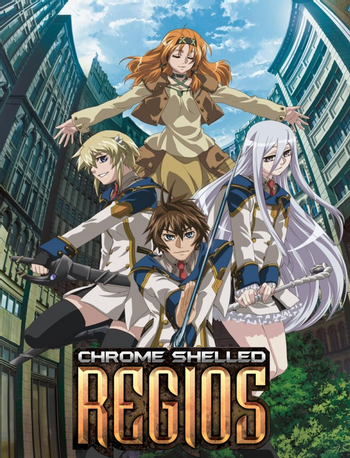 Chrome Shelled Regios is set on Earth After the End. There the remaining population survives inside domed, mobile cities called Regios. These are needed to protect from the horribly polluted atmosphere and giant man-eating Filth Monsters.
Advertisement:

The series protagonist Layfon Alseif, arrives at the academy city of Zuellni with the intent to leave his past behind him and start over as a general studies student. However, he demonstrates his true abilities saving a girl who got caught up in the destruction of a fight between two military arts students. Despite not wanting to fight he is forced into the military arts department which is used for defense of the city as well as competing in intercity matches for valuable resources.

A series of Light Novels written by Shusuke Amagi that has 4 (Yes, 4!) manga adaptations, 2 novel spin-offs (a prequel and a sidestory) and an anime adaption. Of these, the anime has been dubbed by Funimation.