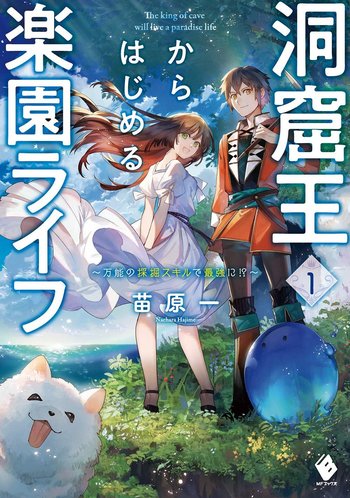 From right to left, the slime Shield, the human Heal, former goblin princess Rianne, and at the bottom corner, the kobold baby, Ril.
Full Title: The Cave King Will Live a Paradise Life -Becoming the Strongest With the Mining Skill?-
Advertisement:

Available and partially translated in web-novel and manga formats.

Heal, the prince of the kingdom of Sanfaris was born with the unfortunate crest of ‘Cave King.’
Because of this crest, he was relegated to being lord of a remote island by his father the king.
Of course, there were no people there, and no trees or plants. It was an island with just a single cave.
However, the moment that Heal picked up the pickaxe inside of the cave, the ‘Cave King’ crest was activated. Its effect was specializing in mining, allowing you to efficiently mine all kinds of ore.
Among the ore that could be mined on the island, there was ore that increased your magic and even ore that extended your lifespan…
Heal would become so engrossed in mining, that he would eventually create the strongest country.