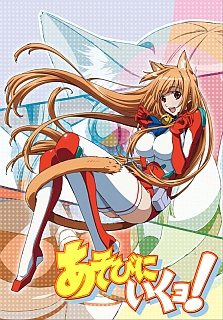 "I'm going to drop by!"
Advertisement:

Originally a series of Light Novels, Asobi ni Iku yo! was further adapted into both a manga and an anime. The anime series aired in the summer of 2010 produced by AIC. An OVA was released in the Spring 2011 season. Funimation, which licensed the anime under the name Cat Planet Cuties, has begun uploading the first episodes onto its own website and regular viewing sites like YouTube and Hulu. It is, however, rated TV-MA, so you need an account to watch it on the latter.

One summer, a message from outer space is sent to Earth, carrying only the message "I'm going to drop by!", setting several organizations into motion.

Kio Kakazu lives an ordinary life on the Japanese island of Okinawa with the girl next door, an old friend he watches movies with, and his party-loving uncle. At a funeral for his grandfather, he meets a Cat Girl named Eris, who claims that her ship crashed near the site, and was looking for some food. Surprised, Kio accidentally takes a sip of his uncle's beer and passes out immediately. A few hours later, he wakes up to find Eris sleeping in his bed. She is a Catian, one of the aliens who sent the original message, and she's here to learn all she can about Earth. However, both she and Kio are unaware of the organizations close to them that want to investigate the aliens for reasons unknown.

no relation to cat planet!