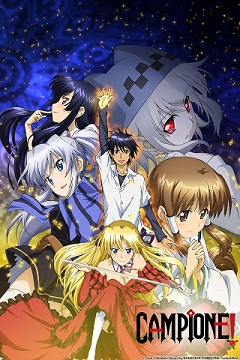 The gods and goddesses appearing in the legends of mankind since the beginning of time rarely descend to earth. Having lost the restraint of their legends, those gods willfully wander the earth and bring disaster wherever they go. We magicians call those gods "Heretic Gods". Man cannot go against god. Even if you gathered all of mankind's power and wisdom, it would still be far from matching a heretic god. But there are also those comparable to the gods on this earth. They are godslayers. While being human, they murdered a god and stole a part of their sacred authorities. We call those seven people campione.

Kusanagi Godou, a 16-year-old boy who played in the senior league as catcher and fourth hitter - that is, the cleanup - when he was in Junior High. However, an injury put an end to his baseball career. Though that was not the end for him. During the spring break of his third and last year in Junior High, he got involved in an adventure and ended up slaying one of the Heretic Gods, Verethragna. Thus, he became the youngest - and seventh - Campione.

Now that he is a Campione, a godslayer, the young Godou must defeat the troublemaking gods, with the help of his followers!

Because of this, Godou now has the powers of the god he killed. Godou, of course, wants nothing to do with the world in question, but he also has a rather strong sense of justice. Unable to simply turn a blind eye to those in need, he uses his new found powers to fight Heretic Gods, other Campione, and random bad guys.

And along the way, he gets surrounded by several girls. All of whom try and pull him deeper into the world of Magic.

The anime streamed on Crunchyroll

. It originally aired for one 13 episode season from July to September 2012. It was licensed by Sentai Filmworks for an English-language release.

The light novel series ran from May 2008 to November 2017 and is complete at 21 volumes. Starting in December 2017, a spinoff light novel series called Shiniki no Campioness was released and so far has 8 volumes. This series details the adventures of Rokuhara Ren, the eighth Campione, though it has a slightly different continuity and rules from the original series. Godou, who is now in his thirties, sometimes makes guest appearances.

Please do not confuse this with the British series Campion.