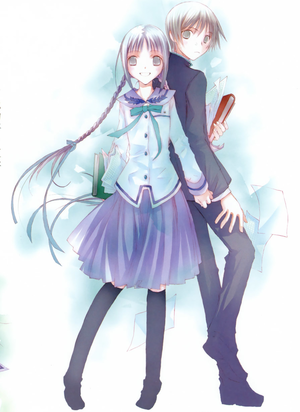 Bungaku Shoujo, or Book Girl in the English releases, is a collection of Light Novel works by Mizuki Nomura. There are about 16 novels in the series with eight being part of the main story, four being short story collections, and four being side stories.

This story is started with an Ordinary High-School Student named Konoha Inoue. His life is quite normal, but only if one disregards the fact that he is a bestselling female romance writer. During his first year of high school he meets Tohko Amano reading a book. Tohko then announces that Konoha is joining the Book Club. A year later, Tohko and Konoha are still the only people in the Book Club and Tohko is studying for college. One day, his friend Nanase Kotobuki falls down some stairs and is hospitalized. Konoha goes to the hospital to see her, and finds his Childhood Friend Miu Asakura who also wanted to be a writer. At that moment starts a story of drama, romance, and mystery as Konoha and Tohko confront Miu and his pasts to fix what was once set wrong.

There are 5 animated adaptations: 4 of them being OVAs and the one movie — just note that they all adapt the last half of the series, so if you're going to read the books, read them first. In addition, several of the novels have been adapted to manga.

The novels also have a sequel, Bungaku Shoujo: Minarai, set after Touko's graduation. They introduce a new character, Nano Hinosaka, a freshman that joins the Literature Club after falling in Love at First Sight with Konoha.