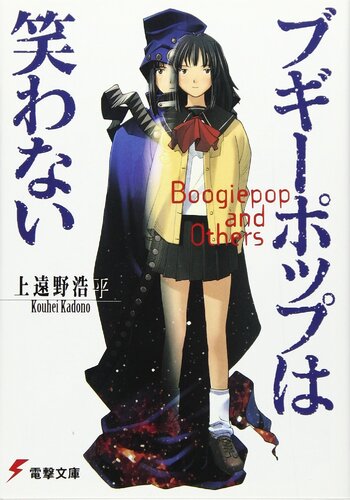 The cover of the first volume.
Advertisement:

There's a legend among the girls of Shinyo Academy about Boogiepop, a shinigami who can take you away while you're still young and beautiful. But when a series of students begin to go missing, it soon becomes apparent that Boogiepop isn't just a legend, and furthermore, there's much more going on beneath the pristine surface of the school.

Boogiepop is a Light Novel series by Kouhei Kadono. With its first volume published in 1998, it currently consists of 23 light novels, an anime-original Interquel series by Madhouse (with Kadono's involvement) called Boogiepop Phantom, a live action movie, two CDs, and two attendant manga series. The anime series along with several of the novels have been released in the U.S. by Seven Seas Entertainment. Omnibus printings collecting the first six light novels were released in late 2018 and early 2019.

Although still obscure in the west, the Boogiepop series was a surprise hit in the light novel business and re-defined the whole genre in many ways, to the point some have gone to call it the first modern light novel. Also, although western viewers might not spot the thread due to its aforementioned lack of the presence outside of Japan, Kadono's work was massively influential over later Japanese works, with many authors, most notably Ryogo Narita, NisiOisiN, Kinoko Nasu and the creators of the Persona videogame series having cited it as one of their main inspirations. A lot of the modern conception of the Chuunibyou archetype was also inspired by this series' eponymous character although it is ironically not an element found within.

A straight anime adaptation of the series, Boogiepop and Others, aired in Winter 2019, also animated by Madhouse.