Light Novel / BOFURI: I Don't Want to Get Hurt, so I'll Max Out My Defense 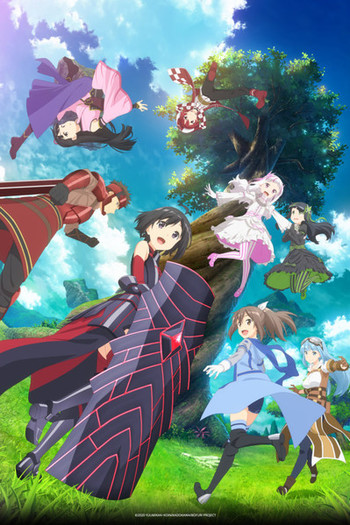 The members of Maple Treenote Clockwise from the left: Chrome, Kasumi, Kanade, Yui, Mai, Iz, Sally, and Maple herself.
Advertisement:

At the invitation of her gamer friend Risa Shiramine, Kaede Honjō tries out the newly-released VRMMORPG New World Online. Although she doesn't dislike games, she really dislikes being in pain. Thus Kaede, under the avatar "Maple", decides to dump all her initial skill points in Vitality so that she couldn't feel pain at all. Because of that, her other stats are rock bottom: very low damage, almost no MP, and the speed of a normal human in a world of high-speed players.

However, she acquired two very rare skills: Absolute Defense (as a result of her high VIT points) and Counter Skill (that lets her counter every special attack). Armed with these two skills and partnered with Risa, playing as the swashbuckler "Sally", she sets to have adventures and fun in this virtual world.

BOFURI: I Don't Want to Get Hurt, so I'll Max Out My Defense (痛いのは嫌なので防御力に極振りしたいと思います。, Itai no wa Iya nano de Bougyoryoku ni Kyokufuri Shitai to Omoimasu in the original Japanese) is a Light Novel written by Yuumikan, illustrated by Koin (of Kanokon and Nyaruko: Crawling with Love! fame), and published by Kadokawa Shoten. A manga adaptation started in 2018, and an Anime adaptation aired from January 8, 2020 to March 25, 2020. directed by Shin Ōnuma for SILVER LINK.. It has been licensed by Funimation, with an English dub in the works. A second season was confirmed at the end of the final episode and is currently scheduled to air sometime in 2022.

The light novels were licensed for English release by Yen Press in October 2020, with the first volume scheduled to be published on April 6, 2021. A mobile OS game, Bofuri: Line Wars

This series doesn't want to get hurt, so it maxed out its tropes:

Bofuri: Line Wars doesn't want to get hurt, so it maxed out its tropes:

Example of:
Damn You, Muscle Memory!

Alternative Title(s): I Hate Being In Pain So I Think Ill Make A Full Defense Build, BOFURI