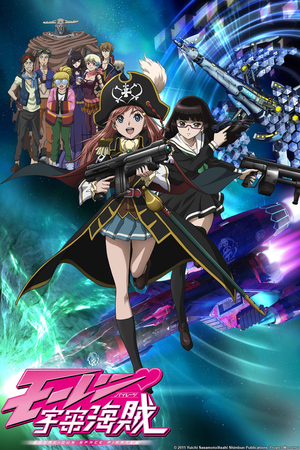 In a far future in which space travel has become the norm, Marika Kato is a high school girl living a rather ordinary life as a member of the space yacht club and a part-time job at a high-class retro café. One day, Marika meets subordinates of her recently deceased father who reveal her father was a space pirate. By law, only direct descendants can inherit her father's spaceship, the Bentenmaru, which her father's subordinates ask that she takes over as their new Captain. Thus begins Marika's life as a Space Pirate.

The anime can be watched legally at Crunchyroll

and The Anime Network.

A dub from Sentai Filmworks, who released the show on DVD in the US, is now available. Also available on Hulu.

A movie based on the series, titled The Abyss of Hyperspace, was released in February 2014. Featuring revamped character designs, it follows Marika and her friends as they help a young man stop running from his family history, and make a decision that would impact countless people across the galaxy and beyond.