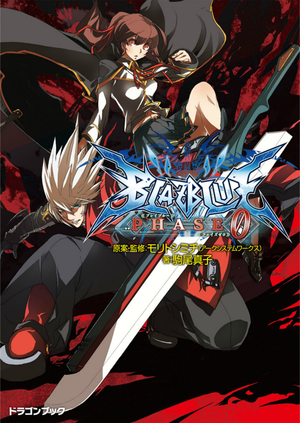 The cover to the first novel.
Advertisement:

Ragna the Bloodedge. The man nicknamed "The Grim Reaper" and possesses the power of the Azure Grimoire. Yet, he awakens in an unfamiliar land and has lost both the Azure's power and his memory.

In this unknown world, he comes across Celica, a girl who is able to use healing magic, and a beastkin warrior named Mitsuyoshi. Their journey is closely related to the Black Beast, a being which drove humanity to devastation. However...

The popular fighting game series BlazBlue's history, previously shrouded in mystery, is about to be laid bare. The official story leading to where it all begins has arrived!

Blazblue Phase Shift are a series of light novels written by Mako Komao, published by Fujimi Shobo and illustrated by Katō Yūki. They're based on official drafts that Blazblue producer, Toshimichi Mori himself created and serve as a Prequel to expand on the backstory of the series, specifically the Dark War and its immediate aftermath leading to the events of the first game.

The series is divided into five novels:

The publishers currently have no intention of release these novels outside of Japan., but a fan translation project has begun for the series (See here

). At the moment, only the first three volumes have been translated.