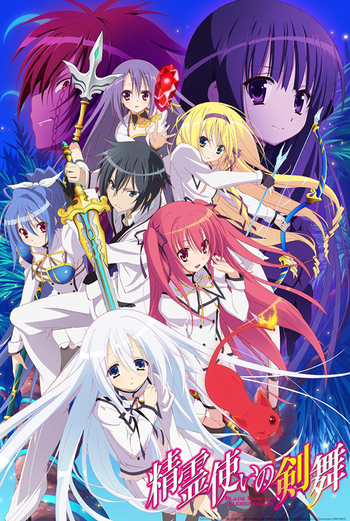 Bladedance of Elementalers, known in Japanese as Seirei Tsukai no Blade Dance, is a Light Novel series written by Yū Shimizu with illustrations by Hanpen Sakura, Yuuji Nimura and Kohada Shimesada. Also called "Blade Dance of the Elementalers". An anime adaptation aired on July 14, 2014 as part of the Summer 2014 Anime lineup, and ran for 12 episodes.

The setting is dominated by spirits, the denizens of Astral Zero. Only a pure maiden can make a contract with a spirit and gain access to its power.

In Areishia Spirit Academy, maidens from noble family are gathered to receive an elite education and become spirit contractors. But one day, the boy Kazehaya Kamito accidentally peeps on a girl taking a bath, Claire Rouge. After punishing him, Claire drags him along to a nearby sealed spirit in the form of a sword, which she intends to contract with for more power. However, the spirit reacts violently and she's unable to form a contract with it. Instead, Kamito is the one who forms a contract with the spirit.

It turns out that Kamito is the only male alive capable of contracting with spirits. Unfortunately, he isn't the first example of this... the other known male elementalist, Demon King Solomon, went down in history as a cruel tyrant. Because of this, various people are wary of him...

Bladedance of Elementalers provides examples of: