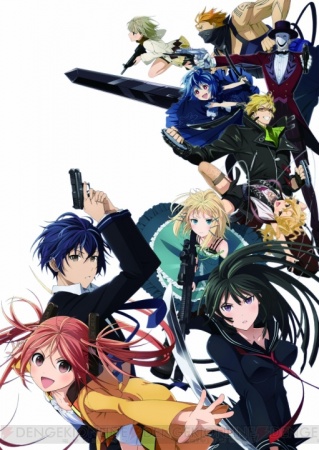 Don't get attached to anyone in this picture. From bottom left to top Enju Aihara, Rentaro Satomi, Kisara Tendo, Tina Sprout, Yuzuki and Tamaki Katagiri, Kohina and Kagetane Hiruko, and Shougen Ikuma and Kayo Senju. .
Advertisement:

In the year 2021, mankind fought the Gastrea and was defeated; and are forced to live within monolithic walls made of Varanium, a material that is capable of subduing the Gastrea. However, despite humanity's defeat, civil securities are established to combat the Gastrea with "cursed children" as the "initiators," who are paired with "promoters" to help lead them.

The story focuses ten years after the war with Rentaro Satomi, a promoter of the Tendo Civil Security founded by his childhood friend, Kisara Tendo. Rentaro is paired with Enju Aihara, a cursed child and his initiator with severe trust issues. Together, they protect the Tokyo area from the threats of the Gastrea.

Black Bullet is a light novel series written by Shiden Kanzaki with illustrations done by Saki Ukai. Seven volumes were published under the Dengeki Bunko label from 2011 to 2014.

A manga adaption was published from 2012 to 2014 in the Dengeki Maoh magazine for 4 volumes, which adapted the first volume of the light novel in its entirety.

, produced by Kinema Citrus, was aired in the Spring 2014 anime session, and ran for 13 episodes.

Rentaro was chosen to represent Black Bullet in the crossover Fighting Game Dengeki Bunko: Fighting Climax by Sega, with Enju as one of the support characters.

Available for streaming at Crunchyroll

The anime is licensed by Sentai Filmworks for home video release in North America with an English dub release, while the novels have been licensed by Yen Press. Black Bullet is currently one of the most requested anime titles for Adult Swim Toonami block.