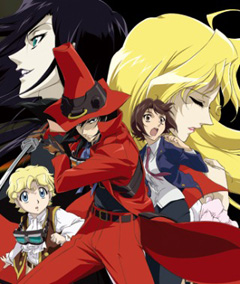 After a vampire apocalypse is narrowly averted in Hong Kong, humanity's greatest defenders, who are mostly vampires who joined the humans against the Kowloon (pronounced kuu-lahn) children, disappear. During the next few years, a safe area for vampires is set up in Japan; it is called the Special Zone.

The series starts 10 years later as Jiro Mochizuki, one of humanity's greatest defenders, and his young brother Kotaro approach the Special Zone looking to move in. Unbeknownst to them, not all of the Kowloon children were killed in the Hong Kong Crusade. Some are after Jiro's life in revenge for his role in their near-extinction.

And theirs is not the only plot in play.

The series originally started in 2004 out as some Light Novels by Kōhei Azano and art by Yuuya Kusaka. In 2006, a 12 episode anime based on the book was created by Studio Live and Group TAC. In 2007 the light-novel was adapted into a manga. The anime was licensed in 2008 and released in America by Funimation. In July 2015, the English dub started airing on U.S. cable network Chiller TV, a horror themed sister channel to Syfy, as part of their late night Anime Wednesdays block.

Not to be confused with Black Blood, a trope about censoring blood, or The Blackblood Alliance, a comic.